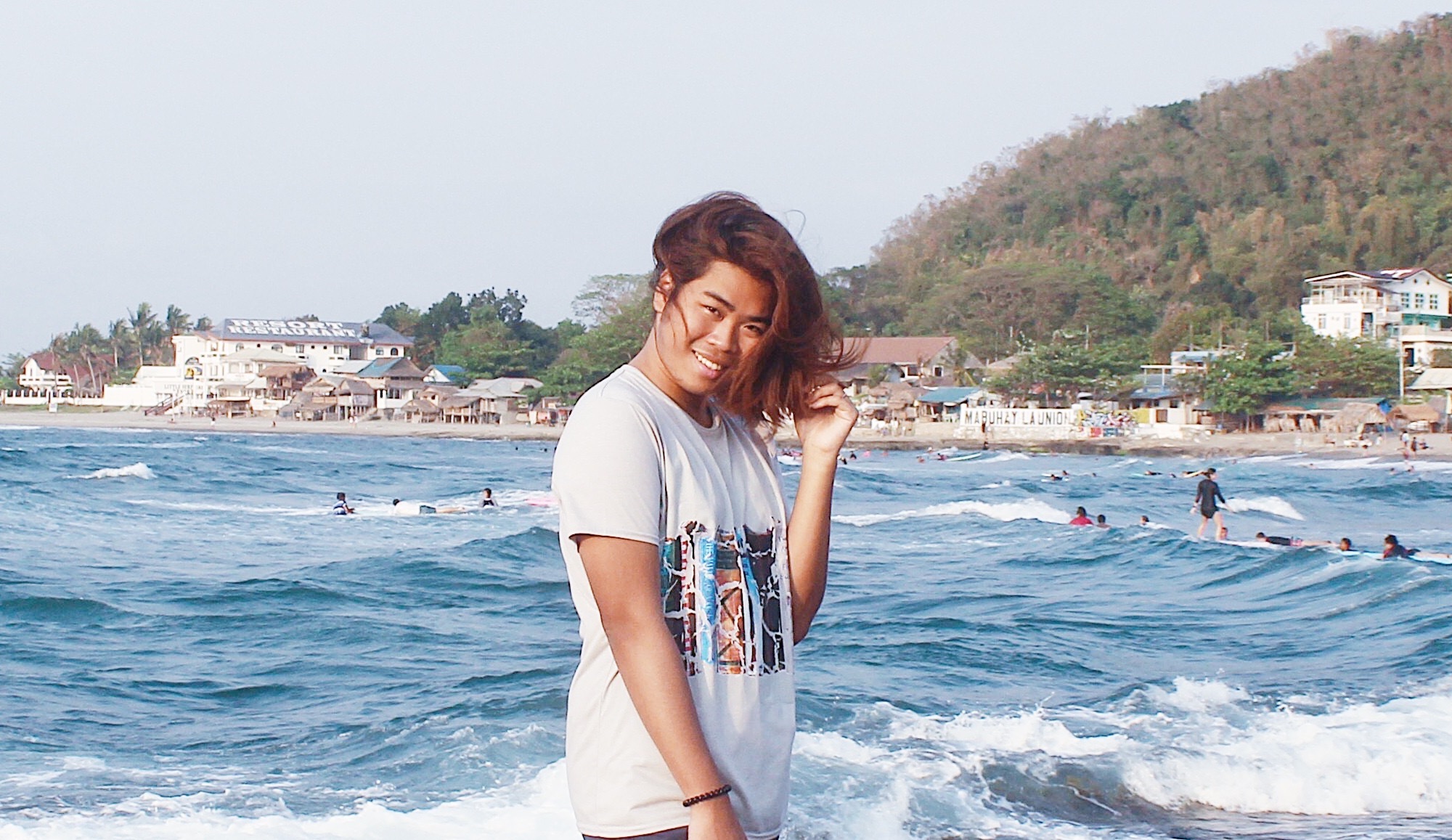 Dry season has started in the Philippines and with that, have you already made up your mind where to escape from the scorching heat of the warmest season of the year? Well, I have few in mind and Elyu made it on the list. I’ll never get tired of driving back to the surfing capital of the north and going on a foodtrip in Urbiztondo. Well, definitely not anytime soon. 🙂

There were so many ‘aberyas/glitches’ days before, hours before, and even on the day itself that almost made this trip got called off. Imagine the stress we had gone through especially when the other car got automatically locked up and the car keys were left inside while we were on a stopover somewhere in NLEX. It felt like the universe conspired for us to really suffer before this trip materialized. But hey! We made it and we sure as hell had fun.

We drove for 6 hours and made it just in time for check in. We stayed at Sebay Surf Central for P5000/night. There were 7 of us so I find it really cheap and very reasonable. I was actually expecting to stay in a hostel but all of them were already fully booked. No regrets. Sebay Surf Central’s location is perfect. It was just a minute walk to the beach and surrounded with the famous local restaurants in La Union. Is it recommendable? A big fat YESSS! And I also love the artsy hallway and rooms.

We were hangry and looking for Gefseis Greek Grill! It’s weird that we had a hard time looking for it when in fact, it was just beside Sebay Surf Central. We came. We ordered. We devoured. That’s the reason why I was not able to take some food shots. LOL. I love the Santorini-inspired interior of this grill spot in Hacienda Peter’s Surf Resort. It’s in front of the beach so you get to enjoy the view at the same time.

After our late lunch, we settled down for a bit and waited for the sun to set. It was a tiring drive that’s why. Then we headed out to the beach and enjoyed seeing people surf and play with the waves. There were a lot of people but it was just fine. We were just seated on the sand and enjoying each other’s company. Complete relaxation with the Amigas. 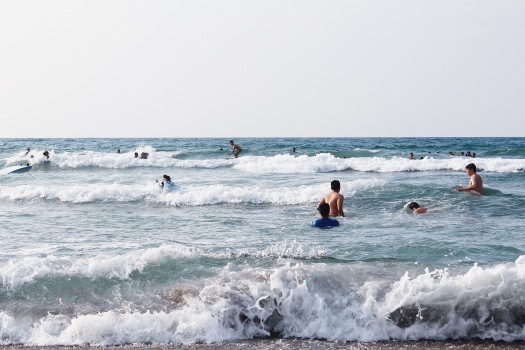 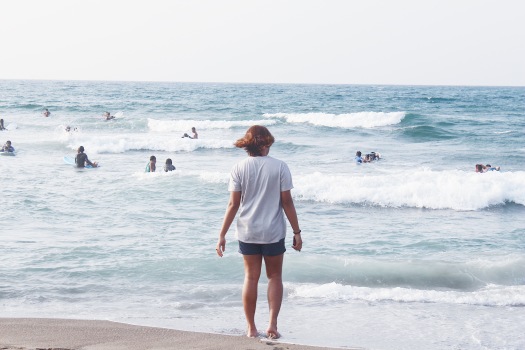 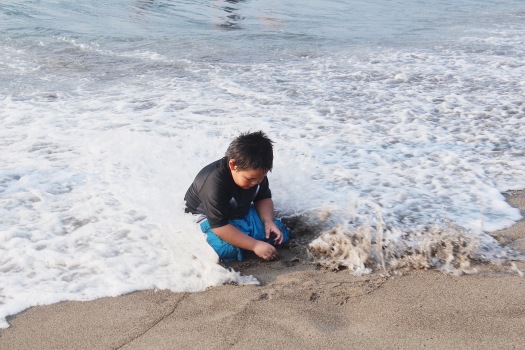 And then we spot this rocky side of the beach! Pictorial mode? It’s so ON! I love the soul-enriching effects of the sound of the waves and the majestic sun while setting. It feels like I am one with nature and I need to document it. LOL ❤ 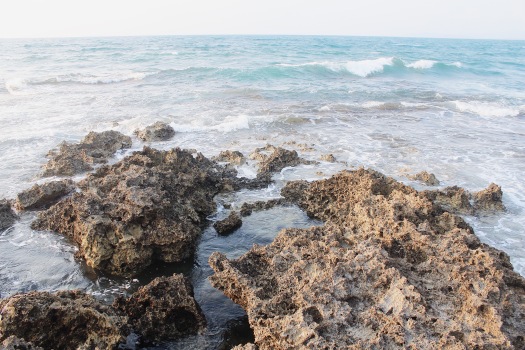 After getting some beach therapy, the food hop began. We started by visiting El Union coffee. We had dinner right after at Tagpuan where you can find very cheap and affordable meals. Then we capped off the night with some booze at Flotsam & Jetsam. 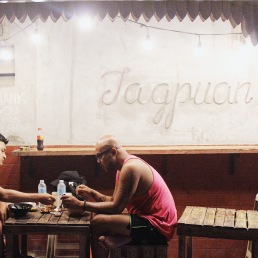 The real highlight of the trip was the restless appetite of the Elyu crew. We’ve been eating a lot since the day we arrived. For breakfast, we had the usual ‘Silog’ but we took it by the beach. And we were supposed to try Mad Monkeys after but they were closed. Figured that most of the restaurants in Urbiztondo do not open until around lunch time. So we just went ahead and tried Choka before we get ready and check out. 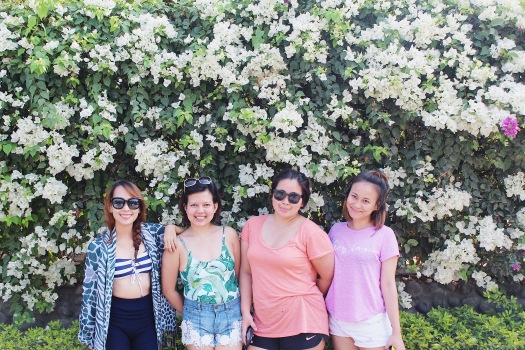 And on our way back to Manila, we were passing Bauang, La Union and so we thought we’d stop by at Gapuz Grapes Farm. It just so happens that Greizlyn’s friend owns the farm. So we had a quick stop and tour around the area. We also wanted to see the Sunflower Maze in Pangasinan but it was temporarily closed during that time. More reason for me to drive back to the north! 🙂 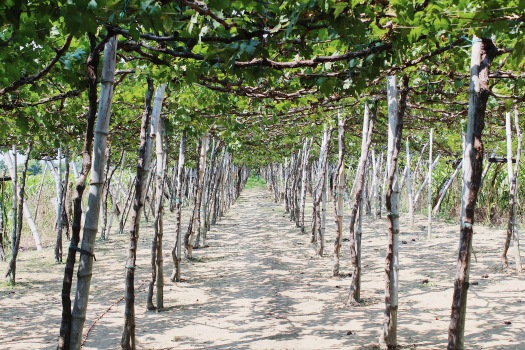 Any suggestion of unheard-of paradise in the north? Comment down below, please! I’d love to explore more of uncharted and little-known paradise. Thanks.