The train is scheduled to leave the central station at 6 in the morning and today’s the first day of transportation strike in Newcastle which means I have to wake up extra early. One eye opened and one eye still closed, I got my lazy ass out of bed and went straight to the fridge to get my ready-to-consume breakfast and put it in the microwave. The room temperature was playing around 1-3 °C. I had chills while staring blankly God knows where waiting for that exciting sound that the oven makes which I expect will snap me out of my still dreaming self. I went back and forth to the bathroom until I am finally ready. Uber’s here. I arrived in the station only to find out that my trip got cancelled. I panicked. I approached a guy who I was hoping is working there during that time. I got lucky. He immediately assisted me and I was informed that I can easily just hop on like a partner train line that will pass by York. Thank goodness I got here and this is exactly where I needed to be.

I’m at the station in York when everybody’s pretty much still asleep. I killed time in a coffee shop for about an hour or 2 and then I started to see a glimpse of Mr. Sun, and I finally decided to start my walking journey. For someone who likes to follow an itinerary, this is unusual for me. I have no concrete plans. I’ll be wherever this day takes me. Let’s take it real slow and easy. No rush, just live in the moment. 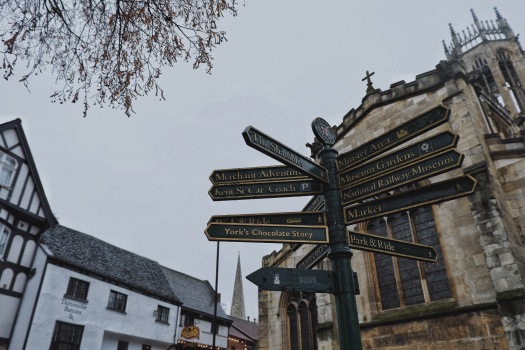 I figured it was still very early because shops were still closed, the Christmas market vendors were still setting up, and there were very few cafes open where people come in and go. I decided to just settle somewhere cozy and watch people since I have nowhere to go at this moment and it started to rain. I ended up having my 2nd breakfast and coffee. LOL. This was me looking for a reason to find a good internet connection ‘coz I rely on free wifis. Yep, I had no mobile data the whole time. I guess that’s the secret to really living the now. Downside? That would be I don’t get to reply to my matches real time. 😀

There were very few people walking the streets and I was just following signs. The Shambles is one of the places you should see surrounded with overhanging timber-framed establishments. It has Diagon Alley feels. This was once a place for butchers to trade but now filled with quirky eateries and shopping spots. The left photo was taken very early, and the right one was taken during the normal tourist hours. I’m happy to have witnessed both. And yes, it was raining all day. I’m not surprised at all. Welcome to England!

I was traveling solo this day and even when I’m not, I’d always go to a church when I see one. Alley by alley, walking to wherever I see crowd. York Minster is in the very heart of the city and it’s as beautiful as most of the holy places I had seen around UK and some other European countries. I find it odd that they got the nicest churches when they got very little Catholic people. But seriously, all I’m trying to say is that don’t skip this one out! Everyone is welcome — Catholic or not. 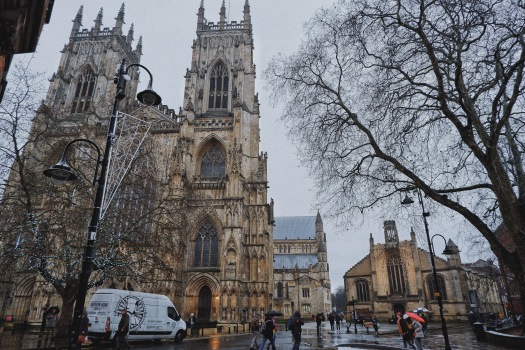 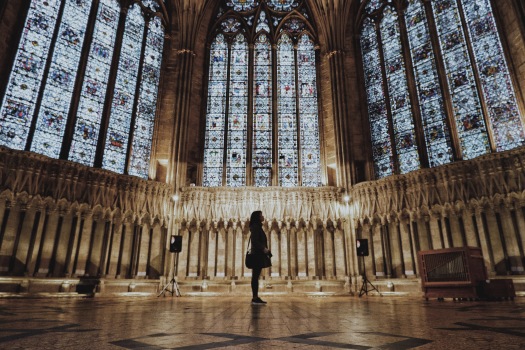 “Located smack-bang in the centre of York, in the cellar of a rather unassuming pub, lies one of the few Roman remains still visible in the city; the Roman bath house.” I passed by here several times and on the 3rd time, they were finally open. LOL. It’s a small museum showcasing the remains of a well-preserved Roman sewage system.

Walking down the main street, there’s this place that seems to be a tourist spot but looks really sketchy. The facade had this old unmanned gate you would normally see in horror movies that looks inviting and everything becomes history once you enter — oh and add that raining effect! LOL. Kidding aside, I still went in. I had to re-think over and over. HAHA!! Yorkshire Museum is somewhere behind all the greens. You wouldn’t see it until you decide to enter the premise of the gardens. 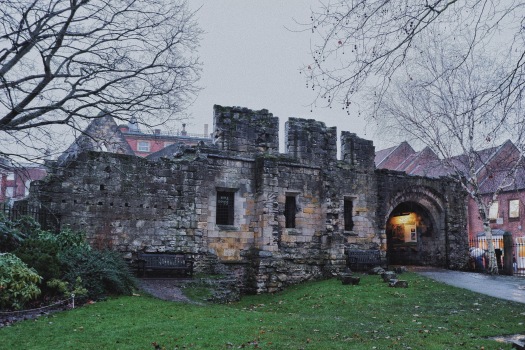 There’s so much more to see in York. Too bad the rain comes and goes the entire day and that I had to stay close to the city center. This city is eye candy from the medieval and cobbled streets to gothic buildings — like most of the cities in Europe. Every turn you’ll be surprised. It’s always picture-ready like it’s straight out of the visuals we see on the internet. What makes this place different is The Shambles, in my opinion, and the fact that from any viewpoint facing the city center, the York Minster always takes a peek from the background. ❤ 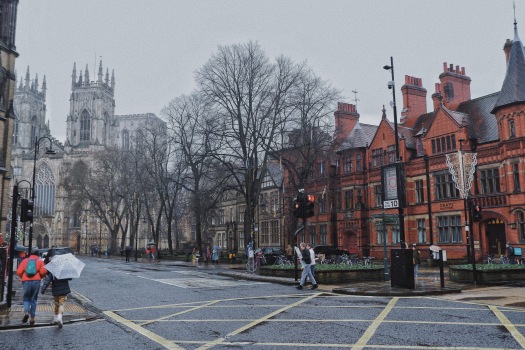 The story doesn’t end here. The train back to Newcastle wasn’t canceled but guess what? It was delayed for about an hour or 2 because there were floods in some parts that caused it. I had to entertain myself in the train station and move around like an idiot. I got home past 9 in the evening. Tired but happy. 😀